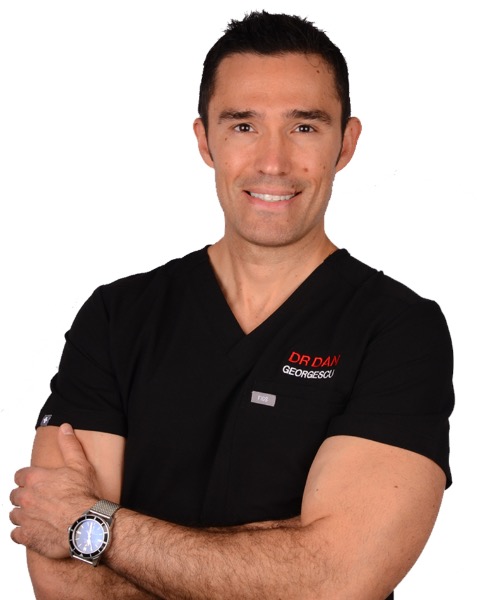 Dr Dan Georgescu (Dr DAN) is a board-certified oculoplastic surgeon by the American Board of Ophthalmology (ABO) and the American Board of Facial Cosmetic Surgery (ABFCS). He is a fellow of the American Society of Ophthalmic Plastic and Reconstructive Surgery (ASOPRS) and the American Academy of Cosmetic Surgery (AACS). Dr DAN specializes in the cosmetic and reconstructive surgery of the eyelids and the face. After completing medical school in Europe and graduate school at Yale University and UT Southwestern Medical Center, Dr DAN trained as an Ophthalmologist at Moran Eye Center, University of Utah. Following a 2-year fellowship in Oculo-facial Plastic Surgery at the Center for Facial Appearances with Dr Richard Anderson and John McCann, the most sought-after fellowship training pro-gram in the country, Dr DAN became a Professor of Oculo-facial Plastic Surgery at the Johns Hopkins MC. He has been in private practice for the past 9 years.

Methods: Video presentation of the surgical technique and retrospective chart review of the last 23 consecutive patients treated with the brow fat flap technique at the time of the fat transposition upper blepharoplasty. A group of 23 consecutive patients treated with upper blepharoplasty alone was used as control. Brow elevation was measured bilaterally on the pre- and post-operative clinical pictures using Image-J 1.40J software (Wayne Rasband, NIH, USA). The horizontal white to white diameter of the right eye was used to calibrate the measurements and attributed a value of 12 mm in each photograph. Medial, central, and lateral brow levels were measured as the distance between the medial canthus and the upper edge of the medial brow, the center of the pupil and the upper edge of the central brow and the lateral canthus and the upper edge of the lateral brow, respectively. A blind observer to the study was asked to grade the improvement in the eyelid-brow junction in each eye operated on a scale from 0 to 5 where 0 was given for no improvement and 5 for uniformly convex eyelid-brow junction. Paired T-test and two-way ANOVA with Bonferroni posttest were used for analysis.

Surgical technique: after the skin only removal, a 2mm strip of orbicularis oculi muscle was excised over the tarsal plate with the Bovie. The orbicularis muscle above the incision was separated from the septum all the way to the superior orbital rim. The septum was incised medially, and the medial pre-aponeurotic fat pad was mobilized into a pedicle and transferred laterally. An intragaleal brow fat pad flap was raised from the lateral orbital rim with the hinge medially at the junction of the lateral 1/3 with the medial 2/3 of the brow. The brow fat pedicle was rotated medially 180*under tension and sutured to the medial pre-aponeurotic pedicle and then to the periosteum at the superior orbital rim with one interrupted 5.0 vicryl suture. The orbicularis oculi muscle was draped over the fat pedicles and the skin was closed with interrupted 6.0 plain gut sutures.

The average improvement in the convexity of the eyelid-brow junction was 4.56+/-0.08 in the brow fat flap group and 3.95+/-0.09 in the control group (p <0.01). There were no major complications encountered. One patient had a minor wound dehiscence in one eye that was re-sutured in the office.

Discussion: The brow fat flap is an effective adjuvant procedure for the fat transposition upper blepharoplasty. It redistributes the volumes in the lateral and central brow which significantly lifts the brow and restores the convexity of the eyelid-brow junction in the lateral half of the eyelid which is not corrected by the medial pre-aponeurotic fat transposition alone (Fig.2,3). In addition, it prevents lateral hooding recurrence by subtracting volume from the temporal part of the brow, situated outside of the lateral orbital rim, which becomes virtually flat. The magnitude of the brow lifting effect is equivalent to that of the endoscopic brow lift and superior to the internal brow suspension procedures1,2. This is likely due to both brow volume augmentation and anchoring of the rigid brow fat flap (that acts like a spring) to the superior orbital rim periosteum which improves the superior and anterior projection of the central third of the brow. This is in sharp contrast to the 1.7 mm average drop in brow position with blepharoplasty alone.